Communication: the key to success for organizations in an in-creasingly participatory society 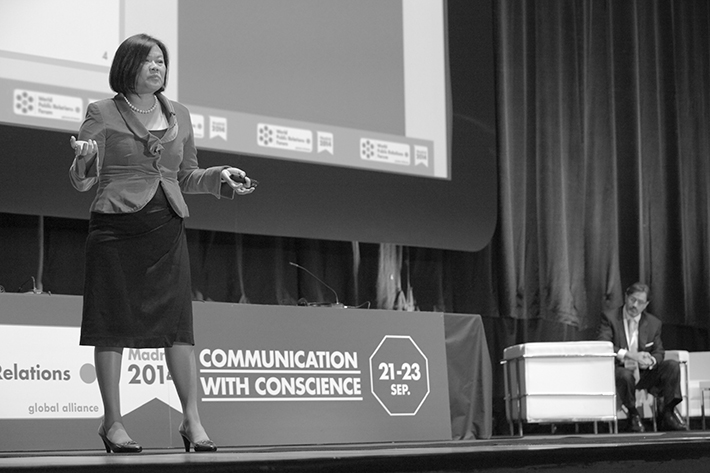 Social conscience, content facilitator, expert in changes to news consumption and new digital supports and the role of the collaborative economy are some of the key facets of the challenge the profession faces.

The first day’s session was officially opened by Carmen Martínez Castro, Secretary of State for Communication.

The 1st official day of the 8th World Public Relations Forum (second day on the programme) has focused on two of the four topics of discussion at the Forum, namely, deconstructing and transforming communication. Marisa Toro, director of communications and public affairs at Google Southern Europe, Antonin Léonard, blogger and founder of QuiShare, and Jerry Swerling, head of strategic communication and public relations at the University of California took part in the afternoon session, where they explained their views on how communication is transforming.

According to Marisa Toro, this process of change has been going on for the last 8 years but it has speeded up now and “we should take journalists along as travelling companions.”  Marisa Toro pointed out that there are several important aspects to take into account in order for the communication professional to be successful: assessing how we consume news; how we present news and the channels used to spread news. “It’s clear that the internet is here to stay and that, as professionals, we all need to incorporate this in our strategy.  Happy incorporation.”

According to Antonin Léonard, the role of the collaborative economy has been a wake-up call for communications and traditional public relations practice. The internet era as a support to create your own news page has transformed thanks to communities on social media. “In the future there won’t be any difference between what employees, users or customers say.  Keeping alert, listening to customers honestly will help organizations fulfill their mission.”  He also stressed that “companies can’t control the message anymore.”

Jerry Swerling closed this session by unveiling the first GAP (Globally Accepted Practices) survey, conducted in 6 countries and focusing on globally accepted practices in the profession.

The afternoon finished after discussion at the four parallel sessions, which covered areas such as reputation; corporate social responsibility; the new relationship between agency and client and measuring communication.

Summary of the morning’s session

Carmen Martínez Castro, the Spanish Secretary of State for Communications highlighted the importance of managing communication and closed her speech with a message of support to delegates: “I encourage this conference to come up with ideas and guidelines that can inspire us.”

José Manuel Velasco reflected on how the current system of organizations works; the power of conscience and importance of creativity. Daniel Tisch urged “professionals to collaborate internally and externally with organizations.  We are promoting spaces for discussion that bring us closer to social justice.  We have the opportunity and the duty to be the conscience of organizations.” Anne Gregory stressed the importance of leadership in public relations in order to “know how to interpret what is out there and bring it into organizations.” For Gregory, a communication professional should be the “manager of a social context.”

After the opening speeches, discussion began on how to “Approach the Global Agenda” in which Martina Larkin, Anthony Gooch; Peggy Liu and David del Val Latorre took part.

Martina Larkin analyzed the current economic trends and highlighted the three key aspects of a leader.  Anthony Gooch emphasized the role of communication professionals: “We do not always have to be the protagonists of the communication process.  We are the facilitators of this process.”  Peggy Liu focused the discussion on the relationship between communication and the environment: “it is important to learn to create collaborative leadership.” David del Val Latorre closed the first panel by stating that “observing the behaviour of others is what makes ideas move forward.”

The last plenary session of the morning was led by Jovina Ang, founder and director of the communications consultancy Communicatio and former director of Marketing and Communication for Microsoft Services in Asia, who stated that: “while we make an effort to be professional, we also need to communicate with authenticity.” For Ang “there are 4 keys to success for an organization: strategy, people, communication and operational excellence.” José Antonio Llorente, founding partner and president of Llorente y Cuenca, highlighted “the importance of betting on notability rather than notoriety, a new concept of reputation.”