Mariano Rajoy at the World Public Relations Forum: “No modern organization can afford to neglect its communication” 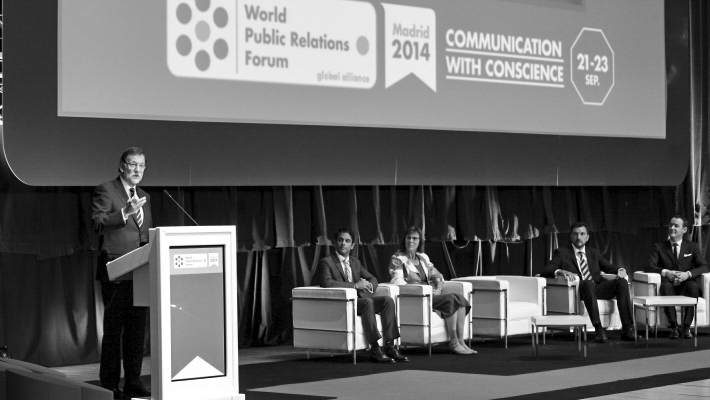 The Spanish Prime Minister, Mariano Rajoy, has taken part in the third and last day of the World Public Relations Forum (WPRF) in Madrid, organized by the Spanish Association of Communication Directors (Dircom) and the Global Alliance for Public Relations and Communication Management, and has shown his institutional support towards communication professionals while recognizing the constant changes the profession itself is having to undergo.

In addition to his gratitude towards the Global Alliance for choosing Spain and in particular Madrid as the host of this communications forum, Rajoy expressed that “no modern organization can afford to neglect its communication”. Furthermore, he reiterated that nowadays the “Spanish brand” is highly valued.

Paul Holmes, CEO of the Holmes Group, alongside Trevor Ncube, Vice-president of the Mail & Guardian Media Group in South Africa, where the stars of the session as they both shared they own particular vision on “leadership through communication”.

Paul Holmes highlighted leadership through action and how public relations have a consulting function inside organizations. For Holmes: “the PR product is ‘relationships’ and we must develop key tools that serve them, regardless of it being an advert, a website or any other platform”. He insisted on the importance of finding a metric that reformulates and serves to measure the impact communication has. Trevor Ncube on the other hand shared his vision on what the role of leaders should be regarding communication and through credible and valuable messages. “It’s hard to understand how someone can be a leader without communicating correctly. Therefore, we must lead through effective communication. It’s not so much about them being good public speakers as having a credible and authentic message”.

Rob Flaherty, CEO at Ketchum, and John Gerzema, president and CEO at BAV Consulting, went into detail about the concept “communication with conscience”. For Flaherty “global social conscience is more than a brand, it’s what people truly think about you”. Gerzema on the other hand spoke about new metrics in communication and threw a challenge at professionals: “As practitioners we must make brands and companies contribute trust”.

The challenges in the industry

The key challenges professionals face in the communications industry where bought to the table at the parallel sessions. Some of them were social business, in which the employee “takes social power over the organization”; the new mobile settings; social media and video games strategies that allow interaction with the public in a more social and bidirectional way.

Topics like the need to communicate with transparency, new trends like co-creations, the role of the profession in the economic recovery and the importance of media in the new social paradigm were also debated at the Forum.

A recipe for success

The closing session of the Forum was distinctively gastronomic under the title “Brands with conscience”. Ignacio Moliner, Communications Director at BBVA, presented alongside Joan Roca their latest project in Latin America in which they invested in talent, authenticity and values by educating in cooking schools. Joan Roca stated: “We were interested from the very start in getting in touch with schools to make them a part of the project”.

Anne Gregory, Chair of the Global Alliance, and Gregor Halff, Chair elect, ended the Forum with some of the main conclusions of the Madrid mandate. Furthermore, during the same session the name of the next city to host the World Public Relations Forum 2016 was announced: Toronto, Canada.