The Deputy Prime Minister of Spain, at the World Public Relations Forum 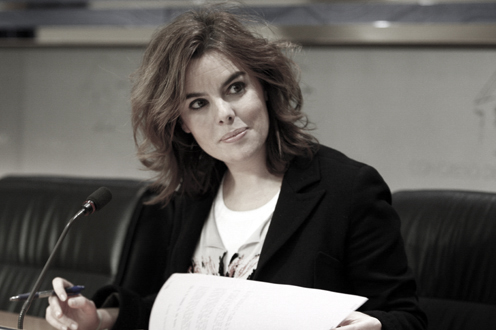 Soraya Sáenz de Santamaría, Deputy Prime Minister of the Government of Spain, will chair the inaugural session of the World Public Relations Forum (WPRF), organized by the Spanish Association of Communication Directors (Dircom) and the Global Alliance for Public Relations and Communications Management, that will take place from the 21st to the 23rd of September 2014 in the Palacio Municipal de Congresos of Madrid.

Sáenz de Santamaría’s presence at the Forum strengthens the governments bet on this international event, crucial for the profession and for the country as a brand, and which will be celebrated for the first time in its history in a Spanish speaking country. This support, also provided at Dircom’s presentation of its Spanish candidacy in 2013, will be reinforced with the presence of the Secretary of State of Communication, Carmen Martínez de Castro, in the Forums Honorary Committee.

The vice-president will deliver a speech at the World Public Relations Forum’s inaugural session that will take place on the 22nd of September at nine o’clock in the morning. Joining her will be Daniel Tisch and José Manuel Velasco, co-presidents of the Forum, and Anne Gregory, actual President of the Global Alliance for Public Relations and Communications Management.

This major event will gather in Spain’s capital city the best communication professionals from all over the world, including major directors like JovinaAng, Marketing and Communications Director, Diversity & Inclusion Lead of Microsoft Asia, Anthony Gooch, Director of Public Affairs & Communications at the OECD, and Peggy Liu, Chairperson of JUCCCE (Joint US China Collaboration on Clean Energy).

So far there are more than 50 confirmed speakers from countries like Singapore, Switzerland, the United States of America and the United Kingdom. Some of the Spanish speakers will be David del Val Latorre, President and CEO at Telefónica Research and Development, Marisa Toro, Communications and Public Affairs Director for Southern Europe at Google, Leopoldo González-Echenique, President of RTVE Corporation, and Joan Roca, chef and owner of El Celler de Can Roca restaurant.